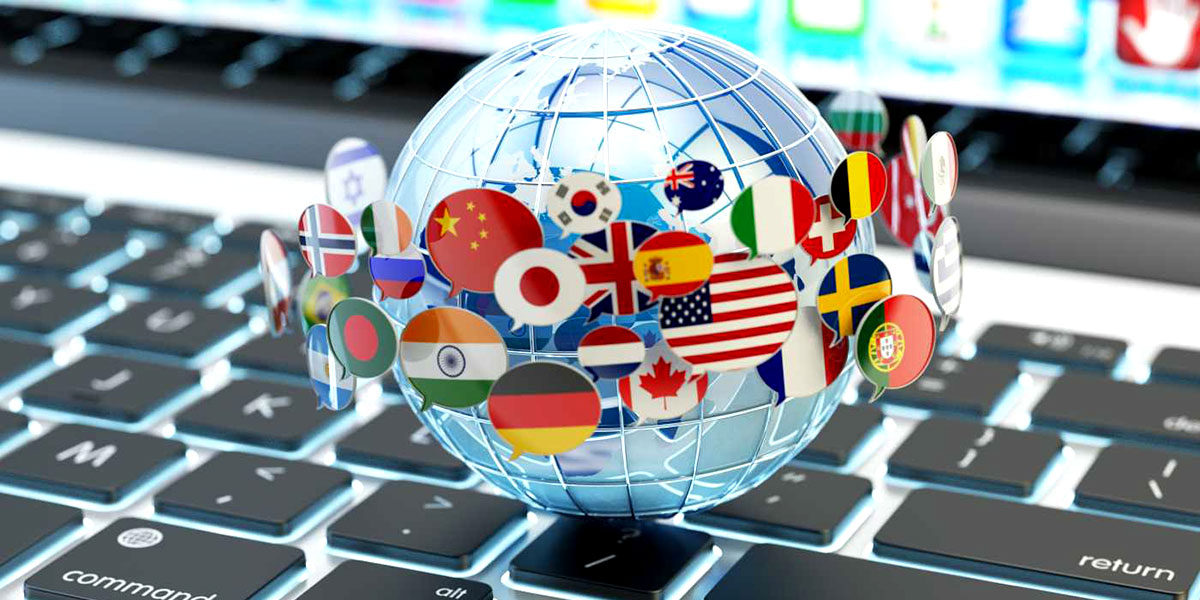 Your company probably has a website. It might not be Amazon or Facebook, but it’s a good, solid website visited by your clients, future clients, and random lookie-loos. The website does its job well enough — it generates sales and informs people about your services. Sure, it’s just in English, but everyone speaks English, right? Then one fine day you come across a troubling statistic: 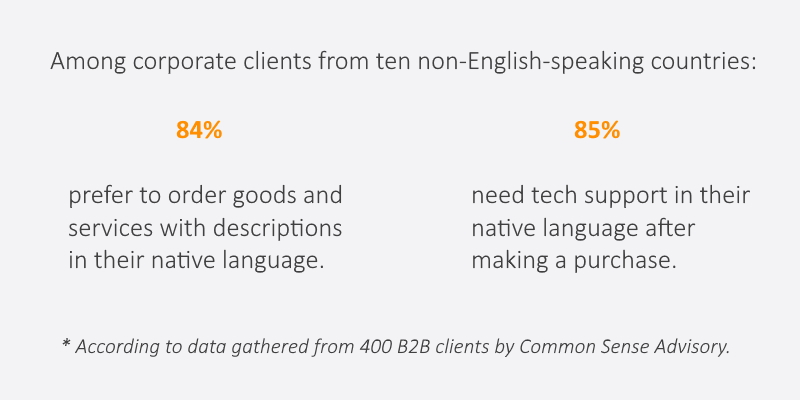 You’re starting to suspect that entire market segments are slipping through your fingers because the users in them have a lame (and perfectly reasonable) preference for websites written in a language they can understand. You’re also starting to think about the opportunities you could create by translating your website into other languages. Needless to say, this primarily affects companies that are already working with or preparing to enter foreign markets.

What does localization give you?

Before we go into depth about website localization, let’s take a look at the benefits you can get from it (and whether or not it’s even worth it).

The most obvious benefit you can get from localizing your website is increased loyalty among groups of users who prefer to get information in their native language. As we can see from the statistics, there are lots of these users in non-English-speaking countries.

Of course, you also have to account for the general level of English fluency in a given country. For example, if your website’s audience is in Sweden or Denmark, you can probably make do with English, since most people in these countries are very fluent in English. But if you want to cover users in China, Turkey, or Saudi Arabia, you’ll need to start thinking about translating your content. You can get a good idea of the level of English fluency in a given country from open sources such as this research project.

Another nice benefit of localizing your website into multiple languages is improving your brand’s image. At the very least, a multilingual website shows your clients that you care about them and can afford to have your website localized.

If your company is positioned as an international enterprise, having local versions of the website in the right languages should be a top priority.

All in all, localizing your website is absolutely worth it if:

How are websites localized?

Localization is about more than just translating the text from a website — it’s a much more complex process that includes technical as well as linguistic factors. You’ll need programmers and testers to do it.

Without getting too deep into the nitty-gritty, the process of website localization can be divided into three main stages:

Let’s take a quick look at each of these stages.

Seven Ways to Save Money on Localization

How to Localize a Mobile App

How Do You Localize an Online Store?

During the preparation stage you will have to decide which parts of the website need to be translated. This isn’t as trivial a job as it might seem. Sure, you could create a new translated version of the website that copies absolutely everything from the original, but is this really necessary? It doesn’t make a lot of sense to translate five whole years of archived news, user comments, articles focused on the local market, descriptions of goods or services that aren't available abroad yet, etc.

After you decide which sections to translate, you’ll need to prepare the files for translation. Ideally, the client (that’s you) provides the source text from the website or gives the localizer access to the website’s admin panel. If this isn’t an option for some reason, the client can send the localizer links to website pages and strings from the interface that need to be localized. Once the text strings have been extracted, an exact localization quote is calculated.

Another rather important detail during the preparation stage is creating a bilingual glossary. This is a list of all terms, brand names, and abbreviations found on the websites.

The website files are now sent to the localizer to be translated. Most localization companies use CAT (computer-assisted translation) systems that make translators’ and editors’ lives a lot easier. Using these systems benefits the client because they make it possible to track repeated segments of text, and most agencies offer discounts on them.

You may also have to think about localizing graphics, video, and other kinds of multimedia content usually found on websites. These elements could require translation, layout, design, subtitling, and/or voice-over.

Once the translation is complete (assuming the localizer cares about quality), all of the text is edited and proofread before being sent back to the client. You’ll want to have the text checked by a native speaker of the target language (the language you’re translating the content into) if possible.

Once the translation has been approved by the client, a new localized version of the website is created. This is usually done by the client’s programmers, but sometimes it can be handled by the localizer.

The last stage involves correcting any potential issues, bugs, and typos on the localized website. To do this, testers go through all the links to the website, identifying problems and recording them in a special report.

The testing stage sometimes gets glossed over, and that’s a problem — without it, you can’t be sure your website is completely ready to receive foreign-language-speaking visitors. For example, a user could encounter an incorrectly-placed comma in a number (instead of a period, for example), or they might not feel like converting feet into centimeters. So we still recommend painstakingly testing your website prior to launch.

At first glance, choosing languages for your website doesn’t seem like something you should have to think too hard about. In most cases this decision is determined by the countries where your company is active or planning to expand.

A Web analytics system can help you choose target languages by tracking the geographic distribution of your website’s users. You could also base your decision on a ranking of the most widespread languages online.

But there are also subtle factors at play here that could affect your choice of target languages. Let’s take a look at a few potential situations:

One of the most frequently asked questions we get from clients is, “which format should the files we send you for localization be in?”

What do you need to know in advance?

Localizing modern websites is a lot like localizing software, so you usually won’t be able to do it without programmers.

There are a few localization-related things that are good to consider when designing a website (this is why it’s considered good form to indicate in the statement of work whether or not you're planning to localize the website into other languages).

The process of preparing the website for the creation of additional localized versions is called internationalization.

Most popular CMS’s support the creation of additional localized versions of the website in one way or another. Usually all you have to do is install a plugin such as Polylang, WPML, or qTranslate X for Wordpress and use it to add the new version.

If you use a CMS of your own design, you need to make sure it has multi-language support. Among other things, the types of data that need to (or can be) localized should be laid out accordingly. This is frequently accomplished using a gettext library that has been fine-tuned for software localization from the ground up.

Keep in mind that a given phrase will almost always be different lengths in different languages. While this might not be especially significant for an article, when it comes to interface elements (buttons, menu options, forms), string length becomes a critical factor. No one wants to see this:

On average, an English sentence is 20-30% shorter than a German or Russian sentence. Chinese and Korean are even more succinct. This is something you need to consider when creating a website mockup — for example, by using relative sizes instead of absolute ones, leaving extra space on interface elements, and generally adhering to the principles of adaptive design.

At some point everyone has probably encountered a problem with a character set where, instead of English characters, you get a bunch of gobbledygook in your document. You can easily avoid this by using the universal international UTF-8 character set, which has become the standard in Web development.

Another important thing to consider is the fonts you pick for a multilingual website. Not all fonts support both Latin and Cyrillic characters by default, to say nothing of Chinese or Japanese characters. This is especially true of designer fonts made to order. So before you use a font on your website, make sure it supports the Unicode standard.

Regional formats and units of measurement

Localization should also include adapting your content to the everyday reality of the target market. This can include regional formats for time and dates, currency, units of measurement, the direction a given language is read in (i.e. right to left or left to right), and punctuation.

To make this job easier, you can use various JavaScript libraries (Date.js, Moment.js, Money.js, etc.) during development to automatically convert formats and change how units of measurement are displayed based on locale.

If there’s anything you definitely don’t want to forget when designed a multilingual website, it’s obeying the law. Make sure that the information on your website and the goods and services you offer don’t violate local laws and that legally significant documents (confidentiality agreements, terms and conditions, etc.) are properly translated. In some cases you may also need local hosting and/or a local domain name in order for your website to work correctly.

A modern website isn’t something that is static and unchanging. Its content should be updated constantly with new articles, news, special offers, and descriptions of products and services. All of this content needs to be translated proactively or created in multiple languages from scratch.

Another important thing to consider is the search engine optimization of the website’s various localized versions – this may also require the services of a localizer. And if you have an online store or other online service, it’s considered good form to provide tech support for your customers in their native language.

So when planning your budget, don’t forget that supporting a multilingual website can also require a certain investment in terms of both money and labor.