Localization for Overseas Expansion — A “How To” for Indie Games

Localization for Overseas Expansion — A “How To” for Indie Games

This article was originally published on Inven

Logrus IT Korea Director KyoungYeon Won took to the stage as the second presenter in the “Creative Talent Partner Project Open Lecture Series” on August 31st. Won’s lecture focused on “game localization”— how independent game developers dreaming of expanding overseas can properly localize their games to meet the expectations of international markets and the process for accomplishing this important task.

Logrus IT is a global corporation that specializes in localization. Its headquarters are in Philadelphia and it has corporate branches around the world. Logrus IT has carried out localization for a significant number of video game productions for clients including Ubisoft, Blizzard and Microsoft. 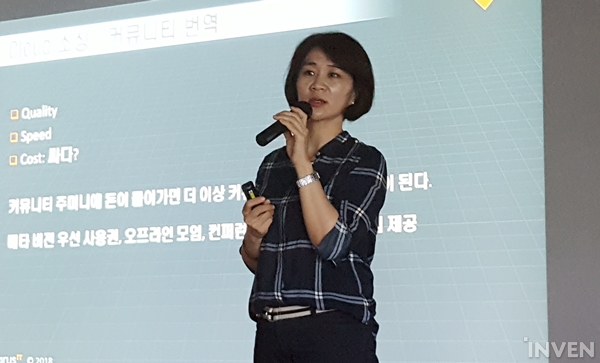 Won began by discussing the need to understand the meaning of localization first and foremost. She says people often overly simplify localization as translation, but there is much more to it than that. Localization is a collective term for the various tasks required to tailor game content or a product itself to suit the local demands of specific markets. This process necessitates long-term consumer market analysis of the target marketplace before anything else.

Though simple text translation can be carried out by a single translator, content must undergo a thorough and complete localization process in order to reach 100% of a market’s customer base. Won explained that Logrus IT and other companies that carry out this kind of work are known as Language Service Providers (LSPs). Proper localization goes beyond the translation of words and sentences to include the customization of dates, times, addresses, weight and other measurements, and telephone numbers to meet specific market expectations. This is crucial to leave customers with the impression that the product was actually developed for local markets in the first place and ultimately leads to increased developer profits.

When carrying out localization through a community, it is important to make sure that support involving financial payments is not provided. The moment money becomes involved, the community transforms from a group of fans to a band of mercenaries and there are cases where money is wasted without any guarantee that the result will be a quality translation. Beta invitations or in-game currency support can be considered for use as alternative incentives.

The second form of localization is the use of “crowdsourcing.” Though crowdsourcing is thought to be an ideal method enabling localization for a comparatively low cost because translation is carried out sporadically, in practice it is a significantly difficult approach in that it actually requires a separate management system and the translators involved frequently change. This can lead to quality discrepancies and other issues.

The final method is the aforementioned approach using LSPs. Though most LSPs offer comprehensive localization solutions and quality assurance as a result of their expertise crafted over years in the business, they do come at a comparatively high initial cost. In that regard, Won has a tip for developers: to reduce costs when commissioning an LSP with localization work, ensure repeated words and sentences are added to a translation memory (TM) for replication free of charge. There are many cases of LSPs not informing unaware clients and simply charging them based on the total word count without accounting for repetitions.

Localization can be divided into four main steps (Won added that the division into four categories is for the sake of convenience—in reality localization requires a process involving more than twenty steps). The first step is “pre-production,” which includes the processes of reviewing the base language source text, carrying out internationalization based on the review, then establishing a post-internationalization source text review and localization range and determining the method of distribution.

The “base language source text review” is the portion that requires the most care in the localization process. It is also the most important aspect that can be the impetus for the success of the localization project or, if done poorly, eat away at potential profits in an applicable overseas market. The following example illustrates this.

In many Western languages, the use of personal pronouns varies according to gender, as do other sentence components such as articles and adjectives. This means that it is very difficult to precisely translate sentences where the gender of a subject or object is unclear, leading to internal game errors or poor critic reviews later on. Proper localization is already a long and complicated process without issues like that to deal with. This is why, when commissioning an LSP to undertake localization, it helps to ensure script accuracy and prepare any necessary supplementary material during the pre-translation source text review process.

“Internationalization,” a process that must occur prior to localization, is necessary when targeting a multilingual market outside language groups worked with previously. This includes a series of preparatory processes needed for localization (perhaps sentence encoding constructed using ANSI code must be changed to Unicode, or weight and measurement units must be unified) and is vitally important when subsequently localizing into a third or fourth language.

After pre-production comes the “production” stage during which “culturalized content” must be reviewed and confirmed. “Culturalization” refers to the stage of localization carried out with consideration for the culture of the country in question. A simple example would be the Japanese rising sun flag that is a constant source of controversy in the gaming community. Because the rising sun flag was used by the imperial Japanese government guilty of war crimes, its use is taboo in countries that were victims of Japan prior to World War II. However, now and then the flag is used in the West due to a lack of understanding of this nuance.

Culturalization is therefore the process of removing aspects that have become taboo in specific cultures or revising content that could cause controversy internationally (calling the East Sea the “Sea of Japan,” for example). Culturalization is necessary for high-quality localization and if it is not carried out properly customers will be unable to shake the feeling that the game was created by a foreign company. 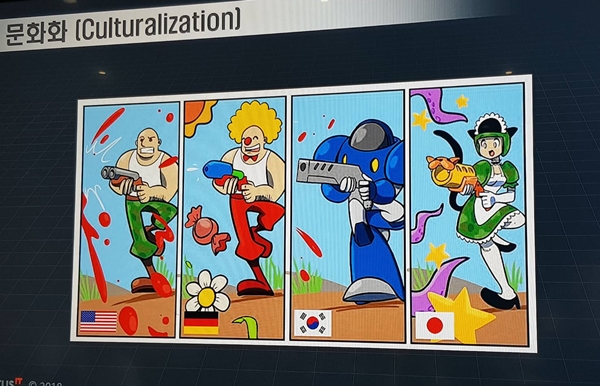 ▲ A prime example of the concept of “culturalization”

After production comes the “inspection and application” stage. Then the last step putting an end to the process of localization is the “post-production and pre-flight” stage. Post-production means reviewing technical requirements and confirming that unexpected issues have been patched up, while pre-flight involves solving remaining issues and achieving final approval.

Timing is important when it comes to localization. “It can take a really long time to complete localization if it is attempted after a game has been fully developed,” Won said. She also explained that if developers determine the target market and get in touch with an LSP during the development process, they can greatly reduce errors and the time required for localization.

At the end of the presentation, Won spoke about the significant difference in profits earned in certain markets by games that were properly localized compared to those that were not, adding that indie developers with dreams of expanding overseas must make sure their games are adeptly localized in order to achieve success.